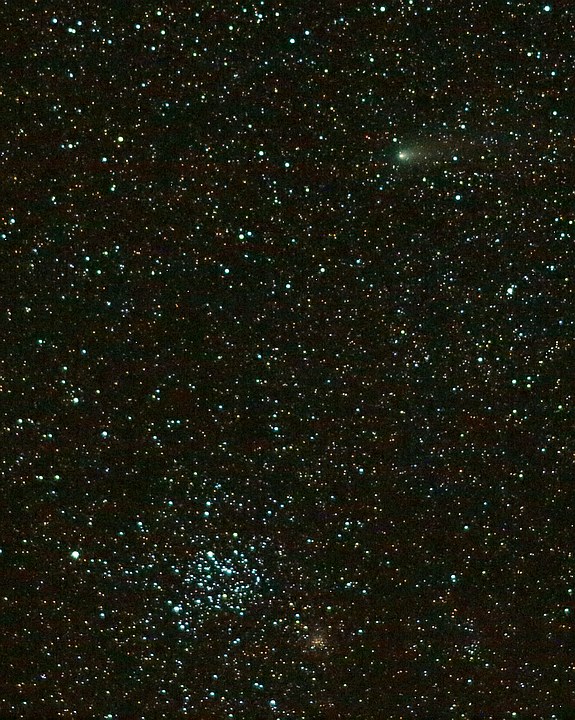 North is up and east is to the left.

The comet (upper right in photo) was 1.70° away from the brightest star at the top of the core of the cluster (lower left) when this was taken. At an advertised angular rate of motion of 4.4 arc-minutes per hour, this puts the comet 23¼ hours away from this star, which coincides roughly with the predicted crossing-the-middle time of ~10 AM UT the 15th (4 AM MDT).

In all, it will take about four hours for the comet to cross the cluster, roughly from 1:30 a.m. MDT 'til 5:30 a.m., with dawn starting shortly thereafter. Over the four hours the comet will move 0.3°, or 60% the diameter of a full moon. It is moving through space at 8000 miles per hour.

The comet will only be 0.38 AU (35.6 million miles) from Earth. It is just a few days past it's perihelion on the 10th (and thus near its brightest) and a little over 1 AU from the Sun (1.023) -- just like the Earth -- so we will be roughly at the same point in space where it now is in a few weeks. Giacobini-Zinner is the parent body of the Draconid meteor shower (also known as the Giacobinids), which peaks Oct. 9th this year (6th - 10th in other years, depending).

This is the second best passage of Comet Giacobini-Zinner for us since its discovery in 1900. It has an orbital period of 6 5/8 years, and was 'lost' for two orbits until Zinner found it again in 1913 by accident (while studying variable stars).

The "P21" part of the designation says it was the 21st Periodic comet discovered. These are further sub-divided into short and long period groups, the arbitrary dividing line being at 200 years.

Michel Giacobini discovered several comets, one of which (#205P) went missing from 1896 until accidentally re-discovered by amateur supernova hunters in 2008 -- seventeen orbits later. In 1903, Giacobini received the Prix Jules Janssen (see Feb 22, 1824), the highest award of the French astronomical society. Giacobini was another scientist to be in a poison gas attack during WWI, but survived and went back to doing astronomy after the war, living until 1938 (age 65).

Comet Giacobini-Zinner is also famous for being the first comet ever visited by a spacecraft -- NASA's ICE, the International Cometary Explorer -- on Sep 11, 1985.

Messier 35 has a measured distance of 2,750 light-years (±50), or almost half a billion times farther than the comet. It is about 24 light-years in diameter. The much smaller and more distant cluster below and to the right of M35 is NGC 2158; it's orangeish color is partly due to the reddening effect of so much interstellar dust that we see it through at its much greater distance (6x), and partly because it contains more older, cooler, redder stars.

The comet crossing in front of M35 should be a fine spectacle for binoculars and small telescopes. At about 2 AM Mountain Daylight Time (or ½-1 hour later), both will be some 20° above the horizon and only slightly N of due E. Orion will be rising, and just clearing the horizon a little S of due E, then... so from the top star of Orion (Bellatrix, not brighter Betelgeuse below it) you'd want to go almost straight left (N) 22½° and up a few degrees until you get to the middle of the Milky Way. M35 and the comet should be right there. The darker your skies the better, and a clear E view would help in ID-ing Orion.

M35 is naked-eye visible for people with good eyesight under dark skies if you know where to look. Allow at least 15-20 minutes for complete dark adaptation. And no bright white flashlights (duh).

Fortunately, this pass of Comet G-Z took place during a really good stretch of weather, so I was able to get solid data on five of the six nights following this one, including the important first one (the 15th). 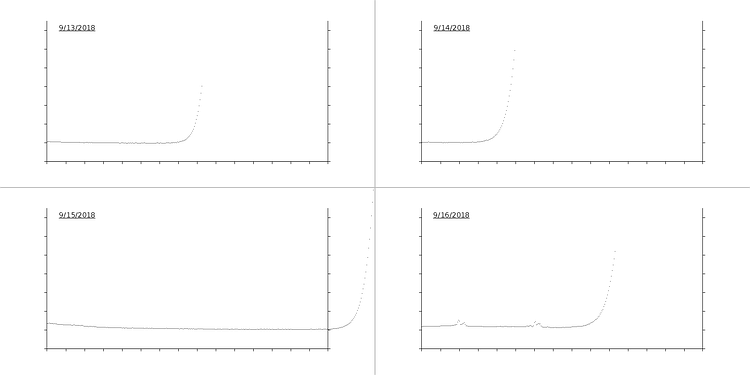 This first graph shows the sky background level for all the frames taken on four of the nights. The steep upturn at right in each is the onset of dawn. Only the last one (lower right) shows two little blips where there were evidently some thin clouds moving through over ~10-15 minutes. What's plotted is the simple frame average (roughly in the V band) for each 30 second exposure. 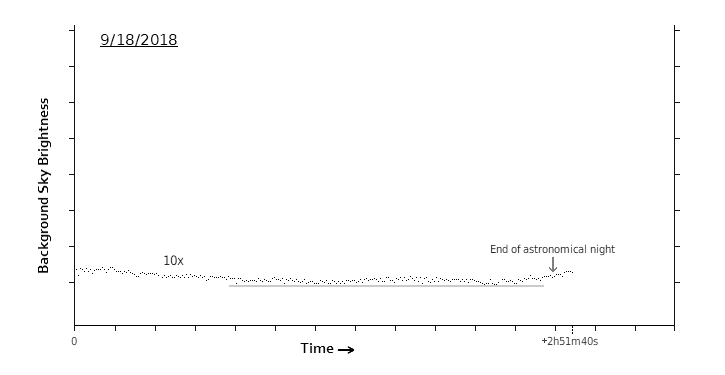 This second graph shows the sky background level for the 300 frames made during a nearly three hour run on the 18th, blown up so the noise can be seen.

The slight drifts, wiggles, and variations are barely above this level. It's not clear whether these are due to drifts in the equipment electronics or are real changes in the sky brightness, remembering that the field is not fixed in elevation because of equatorial mount tracking.

The slight downward slope at the start of the run might then be due to the field rising out of a sky slightly brighter towards the horizon, since it's darker closer to the zenith, all else being equal. The minimum about halfway through was when the field's elevation was ~41° (40°56'), or an airmass a little above 1½. At the end of astronomical night it was 55½ (1.21 air masses).

The low bump between that first one and the one closer towards the end of the run could then be due to a slightly different air mass drifting through and mixing overhead, especially because at its worst (peak of the hump) the noise level itself seems to go up noticeably.

One source of noise that's difficult to take into account is the result of the exposures not being guided. Polar misalignment causes the camera framing to drift very slowly with respect to the sky over long stretches like this. The practical effect is that stars slowly drift out of the field on one side of the frame while they're replaced by new stars drifting in on the opposite side. On average these should cancel each other out so there's no change, but only to the extent the density of stars on the sky in the region being photographed is constant. Just the fact that stars are discrete points means it isn't strictly constant, so there's going to be some noise just due to this. How much is difficult to say. Using the median rather than the mean (average) for the frame background level would largely eliminated this source of error.

The horizontal line is at a sky brightness level, in regular astronomical terms, of about 20½ magnitudes per square arc-second. 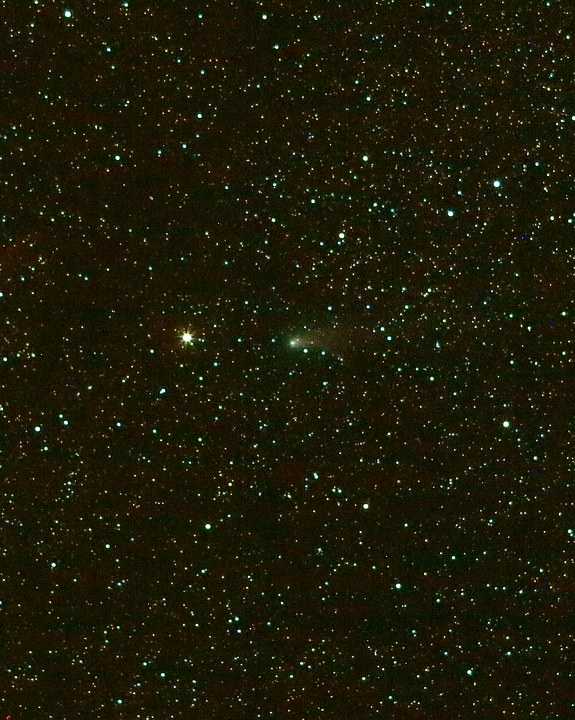 η Geminorum is so near the ecliptic that it has been occulted by planets: Venus in 1910, and Mercury in 1837.

One of the things I noticed early on about this comet was that it was about a day ahead of the location shown for it in the planetarium program Stellarium (v.17.0 from early 2018); due to non-gravitational forces (outgassing, jets, etc.), comet positional observations often show a different set of orbital elements for each apparition.