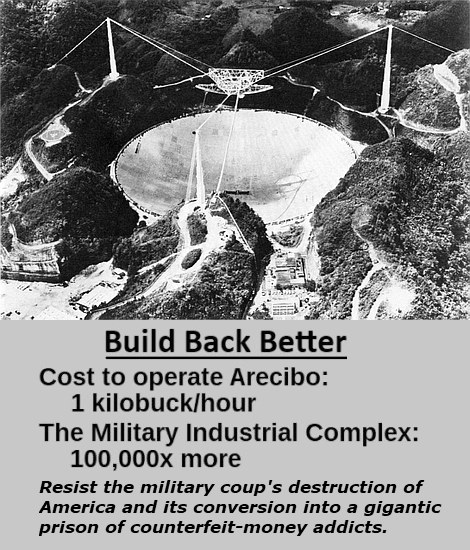 I first worked on the Virgo Cluster my senior year as an undergrad astronomy major at the University of Washington with Dr. Sullivan. He'd gotten a two week run at Arecibo to search the cluster for intergalactic neutral hydrogen (HI) clouds.

He had returned with a small box full of computer magnetic tapes holding all the data -- this was before the Flexible Image Transport System (FITS) had been developed -- and I was pretty good with the campus mainframe and writing number crunching programs, so that was how I got involved, to analyze all this data. Nothing eventually was turned up, but it's still worth describing this work, as some may find it interesting. What turn out to be the dead ends or null results in science never get published.

Arecibo is set in the ground so it can only basically point straight up. As the earth spins W->E everything on the sky moves E->W, and a point on the sky thus moves W->E at the focus of the spherical dish. So things can be tracked in the focal plane, and that's what the curved rail suspended above the dish (called the azimuth arm) is for. It allows one to point roughly ±20° from the zenith.

Fortunately, the cluster is nicely within this zone at Arecibo's latitude (18°N), and it could be tracked for some 2½-3 hours. So the observer gets use of the instrument for 3-4 hours each day before turning it over to someone else for their shift, and then the other 20 hours of the day are for talking shop with others in the cafeteria, catching up on sleep or getting books read, etc.

However, for these observations the telescope was not used in tracking mode. Instead it was positioned out in front of the cluster, the drive was turned off, and the cluster was then allowed to drift through the beam as the earth spins while measurements were taken. The Arecibo beamwidth at 21cm (1420 MHz) is ~3 arc-minutes (FWHM), or only ~1/20°, so on the sky chart, by noting the scale, you can see these are rather fine "cuts" through the cluster at a given declination. After 35-50 minutes one drift scan is ended, the telescope is re-positioned out in front of the cluster again, at a different declination, and the process repeated. So there were 4 or 5 scans made per day, or some 55-60 all told.

A given point on the sky, with a 3 arc-minute beamwidth, takes 12 seconds to go through the beam (3' = 180 arc-seconds, and the sky goes by at 15" per second of time), so the receiving equipment was set up to integrate the signal for that long before dumping it to the tape and starting the next one. Some of the drift scans may have been made at six per minute rather than five. So each scan consisted of 200-250 recordings.

One clever thing Dr. Sullivan did was choose (mostly) declinations which went through (spiral) galaxies that were known to contain HI, as a general check on things and more importantly to also act as a Right Ascension (time) reference, so you knew exactly where you were in the scan. The HI sizes of the spirals in the Virgo Cluster are typically one to a few beamwidths in size, so a galaxy would go by in just 1-2 records, except for a few of the larger ones.

The other reason for including known spirals was that the hypothetical intergalactic HI clouds being sought, presumed to have been left over remnants from when the galaxies in the cluster formed, might thus be reasonably expected to be more concentrated in the vicinity of such galaxies than in the random space inbetween. Supposing a velocity of ~100 km/sec for a typical cloud left over from the time of cluster formation, it would move ~1 Mpc over 10 billion years; so a cloud in the gravitational influence of a galaxy, which had not been gobbled up, would likely still be about only the distance from the Andromeda galaxy to the Milky Way away, give or take. 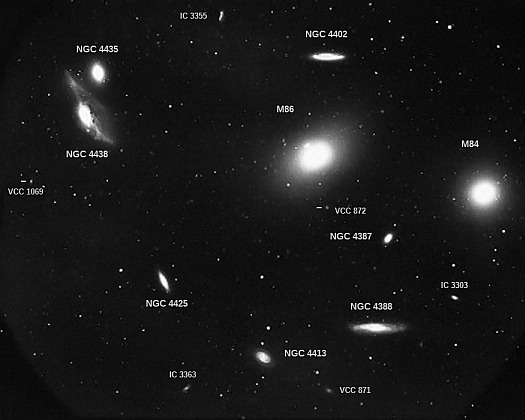 The other possible origin of intergalactic neutral HI clouds derives from an idea first expressed c.1950 in a paper by Baade and Spitzer. This was that S0 galaxies in rich clusters (their typical habitat -- S0 galaxies are disk galaxies composed of old stars, and are devoid of any gas or star formation) were the result of nearly head-on galaxy-galaxy collisions that had stripped the participants, originally spiral galaxies, of their gaseous component, which would be left more or less at rest after a collision. The stellar components of the galaxies pass right through each other during such a 'collision', due to the great spacing between the stars in them relative to the sizes of the stars themselves. One could say galaxies are almost entirely empty space. Except for their gas. It is this gas component which takes part in the collision, and while it is heated up some in a kinematic sense by the collision, it might not be completely dispersed, so as to become part of a cluster's diffuse intergalactic gas background, but would be left in something resembling discrete clumps made up from the combined gas of the two galaxies after the latter have continued on their way. In this scenario it wouldn't have been long enough since the collision for the gas to have fully gravitationally congealed and reassembled itself into a new galaxy, with star formation, stars, and some kind of recognizably normal structure. So instead of being remnants leftover from a hypothetical era of galaxy formation, intergalactic neutral HI clouds could also have been leftover from an ongoing process of galaxy collisions after the (first) galaxies had formed. This process is most significant in denser, more compact clusters of galaxies, whereas the Virgo Cluster is more disorderd, being composed of several "clumps" or sub-groupings of large galaxies. A Kitt Peak 4-meter telescope prime focus photo of the M84/M86 region at right shows one of these; the field is a little less than 1° in diameter, and if you look carefully in the corners you can see its edge.

Ok, so finding intergalactic HI clouds then consists of going through all the radio static looking for a record which sticks up a little above the noise. Empty sky doesn't read zero but instead at the receiver system temperature (80-100°K), so most the noise is from the electronics itself (a small fraction is from the cosmic microwave background). There were some 12,000-14,000 measurements in all, so just by chance, and assuming what's called a normal distribution for the statistics, one would expect about one record in the noise to be at a level of ~3¾·σ. Anything at about that level or above (and positive) might be the beginnings of a faint signal. (Sigma, σ, is a measure of the noise's amplitude; 68.3% of the noise will be between ±1σ, 95.3% between ±2σ, 99.7% between ±3σ, and one in ~4300 records at ±3½·σ; at ±3¾·σ it's one in ~11,300.)

Well, there weren't any really good candidates at the 3¾-4·σ or above that didn't check out as already known galaxies. We eventually did compile a list of about two or three dozen bumps in the noise at the ~3-3½·σ level (or maybe a little less); Dr. Sullivan was able to take some time on his next observing run at Arecibo to point the telescope at these locations (in tracking mode) and integrate for a minute, which is long enough that anything real would have grown up out of the noise, but none of them did.

A null result. In all, some 100 cubic megaparsecs of space were searched, but it's only a small fraction of the entire cluster's volume.

What one does in situations like that is then determine an upper limit, how big something could have been and still escaped detection. This is where the system noise temperature figures in again. Turns out the mass of neutral hydrogen about the size of or smaller than the beamwidth (which is 17½kpc in diameter at my distance for the cluster, or about the diameter of the Sun's orbit in the Milky Way) that we could have detected was only ~107 solar masses. This is not much bigger than the mass of the largest globular star clusters and is less than the mass of the lowest mass galaxies (dwarf spheroidals) by about a factor of two. Yes, Arecibo really is [was] that sensitive.

Backstory #2: Let me tell you about the time I got stood up by Carl Sagan. (!)

A few years later, in grad school, I worked on the Fornax Cluster of galaxies, which is notable and interesting for being almost 180° around the sky from the Virgo Cluster, and at about the same distance. It thus provides an important check on quantities derived from studying the Virgo Cluster.

Like the Virgo Cluster's central galaxy M87, the Fornax Cluster contains a central giant elliptical galaxy, NGC 1399, which was the object of my study.