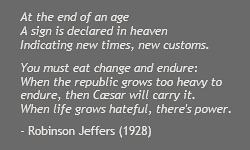 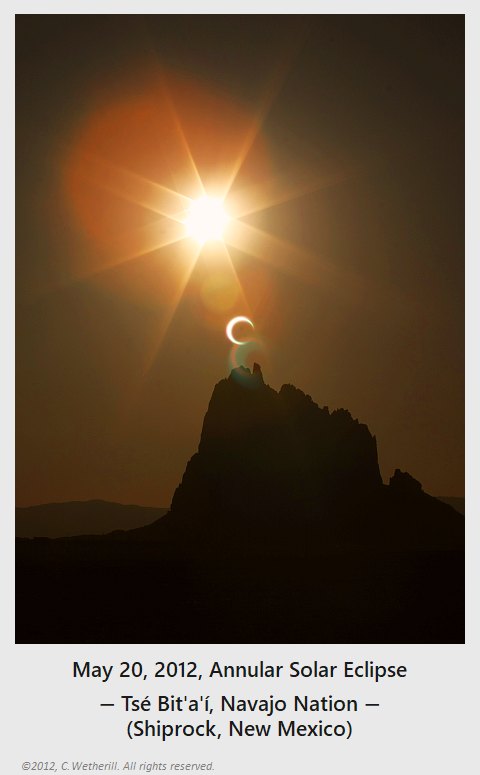 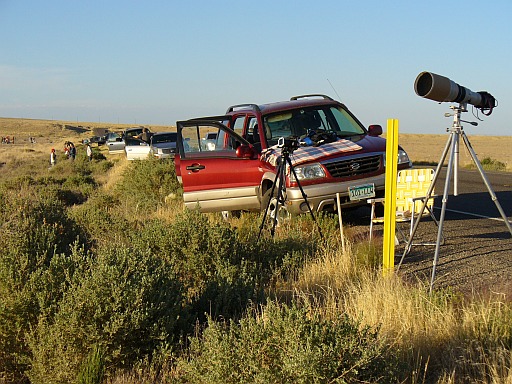 There was a small, impromptu "star party" that afternoon along the stretch of the Red Rock Highway which leads W along the S side of The Shiprock. It turns off Hywy 666 right at the S end of the airstrip a little S of town.

Even though I was safely quite early for the event (it was a 4-hour drive), there were already several people there setting up their observing equipment when I arrived. The Shiprock was practically right on the eclipse centerline, and I talked to one party who had driven all the way from eastern Kansas just for this. My carefully calculated GPS coords for where I wanted to be had me at the extreme W end of where everyone else was -- making me fear I must have made a mistake, until I considered that maybe everyone else hadn't made the exact same calculation(s) I had. As it turned out, and as you can see, I was in the correct location to make this photo.

The Shiprock was about 4¾ miles distant, so this photograph required a mild telephoto lens -- ~3x, specifically an F=85mm lens for my APS-C format digital camera (sensor diagonal = 27.05 mm). You can see it in the photo at right on the smaller tripod; the solar filter was removed for the period of maximum eclipse, when the landscape illumination drops to ~1% or less of the un-eclipsed Sun. (I was willing to take a chance on the sliver of sunlight visible around the moon not searing a hole in my shutter curtain.) That's a 600mm lens on the heftier tripod. The yellow marker was already there, seemingly put by magic to mark the exact right spot I was looking for by some highway crew.

Because of the way internal reflections work, the frame center is midway between the (overexposed) primary image of the eclipse and the (first) internal reflection, so very little cropping of the original frame was applied to give the composition you see. The reflection is reversed, meaning the real moon is moving in the 10 o'clock direction, so this was made just before third contact, near the end of the eclipse. Note especially the bizarre, asymmetrical diffraction rays surrounding the primary image of the eclipsed Sun.

Too many astronomy enthusiasts pooh-pooh annular eclipses as being "nothing special", but this was as memorable as my two total eclipses, if not more so. The Shiprock has always been a favorite sight of mine in the Four Corners area -- it can be visible from great distances under the right conditions -- and since this scene won't be repeated for a very long, long time, it was quite spectacular being there to try for this photo, successfully as it worked out. 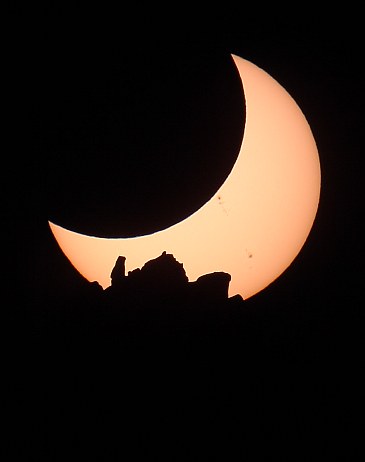 This eclipse was a member of Saros cycle #128: After two dozen partial eclipses, from the years 984 to 1399, this Saros had but four total eclipses (1417-1471) and four hybrid eclipses (1489-1543) before beginning the current string of 32 annular eclipses in 1561, of which this was the 26th, and the last one this far south. The last annular eclipse in the cycle will be in 2120, after which the remaining nine will all be partial eclipses. The July 3rd, 2084, eclipse will pass nearly right over Seattle, WN, with the sun/moon setting in the western sky much as occurred here.

About 20-25 minutes later, a little less than halfway between third contact and fourth (final) contact, the Sun started to set behind this incredible chunk of rock, making for the long focal length photo (w/solar filter) which really emphasizes the relative sizes of the moon and Sun.

Exposure: An 87.15% eclipse factor means roughly 7/8ths of the Sun is covered by the Moon and 1/8th is not. So at first glance it would take a 3 stop increase in exposure to photograph the eclipsed landscape. (23=8)
However, the part of the Sun still exposed is the most heavily limb darkened part near the edge of the visible disk. Limb darkening models typically have a point ~95% (or a little more) of the way from the center of the Sun's disk to its edge at ~50% the brightness level at the center, so this factor adds about another stop.
For this particular photo an additional factor was the very late afternoon, low angle of the Sun, hardly an hour before sunset. This adds another two stops: the Sun's elevation of ~8° means an 82° zenith angle, which by the sec(z) relation means its light has come through ~7 air masses; at ~0.2 magnitudes extinction per air mass in the visual part of the spectrum for a high, dry, desert location like this, the total is ~1½ mags, or a factor of 25%, which is two stops more, for a total of 6 stops more exposure than one would typically give during full Sun and the middle part of the regular, uneclipsed day -- what many photographers call "Standard-16", because it is an exposure of f/16 at 1/Nth of a second, where N is the ASA or ISO (film) speed.
But none of this is what I did! The reason is that the first internal lens reflection would then have been way over-exposed given such an exposure. This consideration required 8 stops less exposure to be given, or a net of two stops less than "Standard-16". The surrounding landscape is then quite under-exposed. I probably could have given one or two more stops exposure to better favor the second internal reflection (centered on the Shiprock's summit pinnacle), though the exposure given was still sufficient to record it above the noise/dark level.

Finally, I note that the October 14, 2023, annular solar eclipse once again has the Shiprock near the centerline.

[The last two photos can be seen at about double the size you see them here: in Firefox on Windows, place your cursor over the picture, right click it, and then select "View Image" from the menu. Use the Back button to return here.]