"Behind all the exhortations to be safe is the idea that safety is impossible. The whole philosophy. . .involves a kind of perpetual anxiety."
- Katie Roiphe

What to Do About HOA Abuse 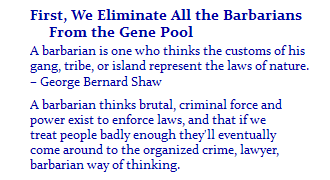 ©2019, Chris Wetherill. All rights reserved. Display of words or photos here does NOT constitute or imply permission to store, copy, republish, or redistribute my work in any manner for any purpose without expressed prior permission. Thanks.