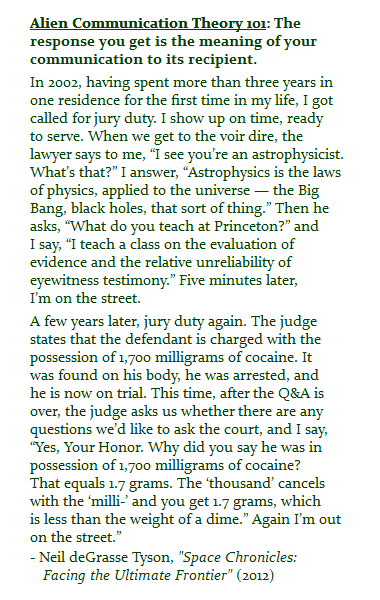 Actually it was the second time. The first time I sat there in the big jury pool room for 3½-4 hours as others' names were called in batches, until the boxes of donuts were long gone and the bad coffee had gotten stale, and they said the few of us left were free to leave.

I guess that by showing up they know you're a real person who they don't have to hunt down and charge with the crime of not showing up for jury duty, so your name gets put back on the list and you shortly get a second notice. This time it was 45 minutes or an hour before me and a group of others were called and taken upstairs to one of the courtrooms.

We were only told it was a case between a homeowner and a building contractor. They didn't really explain the difference between a civil case and a criminal case, but this was the former. A rather mundane matter. The sort of thing that happens everyday. I didn't have a horse of any color in the race, though I vaguely knew from the local TV news that the plethora of such cases was a minor political issue in the state. Kind of like how high malpractice insurance costs incurred by doctors were supposedly to blame for the high cost of healthcare (at one time at least), the home builders had been blaming all the law suits against them for the housing shortage and/or high(er) cost of new homes. Their trade association had been lobbying for a change in the laws so it would be more difficult to sue them, even though I don't know if that was exactly what was going on in this instance.

Anyway, I don't recall which side "our" lawyer was on -- they get to query potential jurors in turn and separately, and eject some number of them (us) without question -- only that one of the first things we were asked about was whether or not we knew how to read blueprints, which kind of stood to figure given the nature of the dispute.

Before it was my turn to answer I was already thinking ahead as to how having to serve on the jury during the course of the trial was likely going to impact my time down the line, and the other things I was doing and working on then.

I had to explain that as a high school senior I'd taken a full year of architectural and engineering drafting, the final term project for which was designing and drawing up something appropriate and having blueprints made of it.

Moreover, I'd gone on with my education as far as graduate school in scientific and technical fields, so dealing with graphs, charts, and diagrams of all sorts was practically a routine matter. In short I was highly qualified and competent to assess the key evidence in the matter at hand.

Before I had time to think or say the above I was excused and told I was free to go.

As I got out into the hallway, somewhat bewildered and confused, but in neither the position nor really the mood to object, there was a nicely and professionally dressed gentleman a few years older than me who'd just come out of the adjacent courtroom, where the other lawyer had been screening the other group of potential jurors. Turns out he was a computer engineer with a major well-known tech company. With all the Air Force, Space Command, and NORAD stuff going on in Colorado Springs (where I lived then, something like 8-10 years ago), all the big companies like Boeing, Intel, Hewlett-Packard, Texas Instruments, Radeon, etc. have offices there. Basically the same thing that happened to me had happened to him.

It only took a few seconds comparing notes to realize what was going on. The lawyers had no interest in arriving at the factual truth of the matter, what was right or wrong, what a qualified but neutral observer would judge of the evidence, or in justice and fairness and all the other high-minded sounding verbiage the courts purport to be about. They just wanted the most incompetent idiots as possible as jurors so they could bamboozle (persuade) them that their side was right.

In a case where a blueprint is evidently at the heart of the issue, the last thing a lawyer wants is anyone on the jury who is capable and competent reading blueprints. They can't get rid of those people fast enough. They might be dangerous!

One of the unwritten and unspoken rules of American business is that no one ever hires anyone they think is smarter than they are. The same thing is at work here: the lawyers view the jury as working for them. Since the lawyers are likely ignoramouses who can't read a blueprint themselves, someone who could represents an unknown, a wildcard, a potential threat to their control of the jurors.

Truth and schoolteaching are incompatible, too.

Reforming the school prison system: more guns for kids to kill more teachers, or more guns for teachers to kill more students? Rhetorical question... the system has been taken over by commies and thugs: "power comes at the point of a gun". - Chairman Mao Zedong.

©2017, Chris Wetherill. All rights reserved. Display of words or photos here does NOT constitute or imply permission to store, copy, republish, or redistribute my work in any manner for any purpose without expressed prior permission.