An Eclipse Expedition of the Past 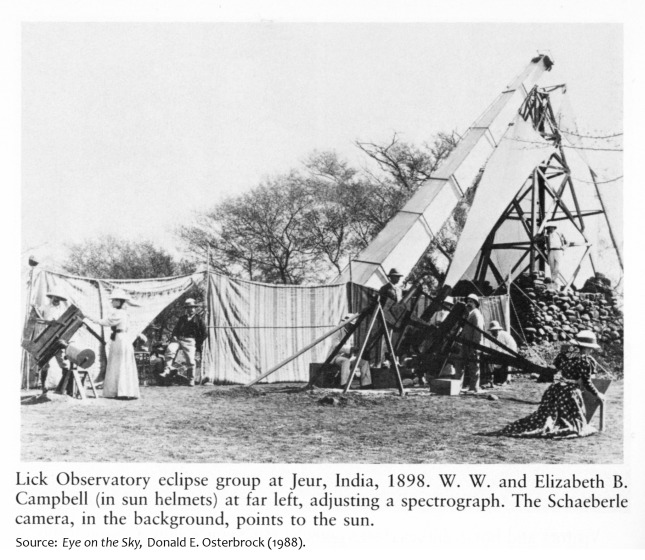 The Schaeberle camera had a 40-foot focal length, almost unimaginable by today's standards for a portable instrument, but it was the principle tool the Lick Observatory crews took to perhaps a dozen or fifteen eclipses over a four decade span from 1893 to 1932. It was a 5" diameter (f/96) lens made by the famed Alvin Clark & Sons.

There being no funds in the budget for these expeditions, they were typically funded by wealthy San Franciscans, such as "widow Hearst" (wife of the Senator and mother of the newspaper man), which is a large part of why they ended during the Great Depression of the 1930's, though it was also partly due to their decreasing scientific justification.

Also, the W.W. Campbell mentioned in the caption became director of the Lick Observatory in 1901 and retired in 1930 -- even while acting simultaneously as the president of the University of California (primarily just Berkeley then) from 1923 until retirement; he was then president of the National Academy of Sciences for a four year term.

A trench was typically dug ten or fifteen feet down into the ground to provide a working space for those down in the pit who were operating the camera plate holders and spectrographs at the focus, who thus didn't get a very good view of what it was they were observing. They were drilled for days in advance in the planned tasks to be undertaken during the few minutes of totality. In the very earliest Lick expeditions, perhaps even before the Schaeberle lens was employed, visual observations were made in the pit, and in at least one instance they even used burning standard candles (yes, real wax candles, on fire) as comparison light sources for measuring the brightness of the corona.

The lens itself was supported on a 15-20' tower, as seen in the picture. The shielding of the light path was done with an independently supported structure, so as to not jiggle the lens or instruments in any wind. This was canvas in its earliest incarnation or two but a constructed wooden box as seen here.

The entire system is mounted fixed, so the calculations (all done by hand) as to where the Sun would be at totality had to be checked and re-checked, since there were no do-overs. If it was clear at the same time a day or two earlier, the pointing could be confirmed and tweaked if necessary, knowing the daily motion of the Sun, especially in declination (astronomical latitude).

For eclipses that occurred with the Sun high in the sky the telescope was mounted horizontally on the ground and a tiltable flat mirror was placed in front of the lens to direct the Sun's light into it -- known as a heliostat if the mirror is driven by a clockwork mechanism around an axis parallel to the Earth's rotation axis, so as to track the Sun's motion across the sky and keep it centered in the field of view -- an arrangement used on all subsequent solar telescopes specialized for observing just the Sun. The expeditions used a fixed mirror, and instead had moving plate holders and instruments at the focal plane to track the Sun's motion there, which is roughly its own diameter in about 2 minutes, though in at least one instance they tried rolling everything along a properly oriented flat surface to provide the focal plane tracking.

Forty feet is 12,200 mm's, which is roughly the equivalent focal length of a 4-meter f/3 system. This focal length and image scale -- S=1/F in radians, or ~17 arc-seconds per mm for F=40' -- was necessary to record all the fine detail possible with the photographic emulsions of the era.

Emulsions six or seven decades later were finer grained (less noisy) and maybe faster but not appreciably better in terms of resolving power. At the prime focus of the Kitt Peak and Cerro Tololo 4-meter telescopes (f/2.8, and designed in the 1960's), the scale was 18.6 arc-secs/mm.

By coincidence, at the 93 million mile typical distance of the Sun, the Earth itself would subtend a diameter of only 17½ arc-secs, or about 1 mm at this image scale. So if the "seeing" (atmospheric turbulence twinkling and blurring) at the time of the eclipse is excellent (~1 arc-sec) one can resolve something at the Sun's distance which is about 450 miles across (1/17.5 of the Earth's diameter).

©2017, Chris Wetherill. All rights reserved. Display of words or photos here does NOT constitute or imply permission to store, copy, republish, or redistribute my work in any manner for any purpose without expressed prior permission.