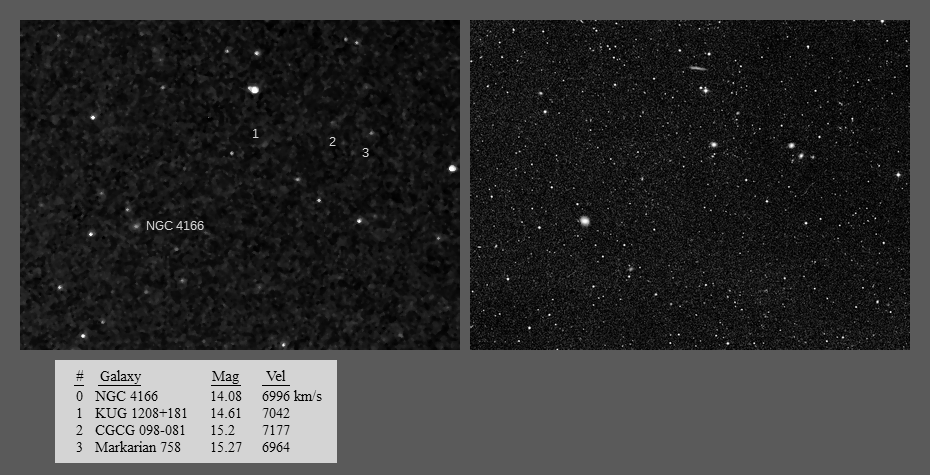 F=200mm + Canon 1D Mark IV camera (30 second exposure, left) and Palomar Observatory Sky Survey fields of the NGC 4166 Group,
in the NW corner of my M100 / North field; 33.3 x 44.4 arc-minutes.
All these catalogued magnitudes are presumed to be B (blue) or photo-blue (~mpg) magnitudes;
V or visual magnitudes would typically be ~¾ magnitudes brighter (lower numerically).

The NGC 4166 Group is a sparse group, with only the one major galaxy (an SBO) and several small, compact, high surface brightness companions, which are all clumped or strung out to one side of NGC 4166.

The mean velocity of the four galaxies is 7050 km/s, so with Ho=73 the implied Hubble Law distance is 96½ Mpc. More sophisticated cosmological models yield slightly higher values, like 102-104 Mpc.

There is no redshift-independent distance to this group, so the discovery of a supernova in it would be helpful by adding a second datapoint. SNe at this distance are likely too faint by several magnitudes for my equipment.

The undetected edge-on disk galaxy (type=Sm?) within the distinctive right triangle of stars above KUG 1208+181 is UGC 7186 (mag=15.8); v = 2329 km/s, so it is in the foreground relative to the other galaxies. This is why it's larger than the other galaxies in the field.

Its velocity implies m-M is one magnitude (58.5%) farther than the Virgo Cluster, so based on its apparent magnitude (m) it is an intrinsically faint galaxy, roughly as bright as the Small Magellanic Cloud (SMC), only 450x farther away. On the POSS Sky Survey (R exposure) it is 110 arc-seconds in extent, which is 17+ kpc at this distance. This is almost 4x (3.85) the size of the SMC [D(0)=4.5 kpc].

What's happening here is UGC 7186 is likely a much bigger and intrinsically much brighter galaxy than the SMC, but because it's disk is viewed nearly edge-on it is optically thick at visual wavelengths because of interstellar dust, so only its outmost layer of stars contributes to the apparent brightness we see from this angle.