Bryan Cashion of the Black Canyon of the Gunnison Astronomical Society sent me this photo of a distant cluster of 17th-19th magnitude galaxies scattered across the field around the star HD 89729. He made it with a 3/8-meter (14½") telescope, using a specially modified DSLR camera and with a much longer exposure time than I'm using. 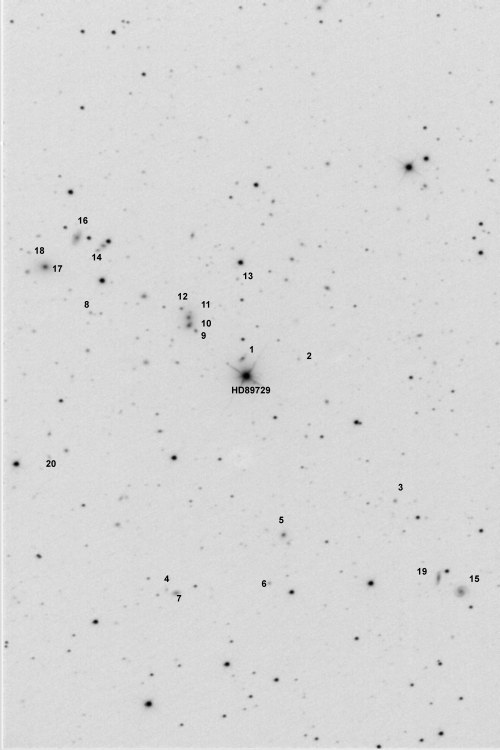 Relative to my equipment he gets a sensitivity gain of about 3 2/3 magnitudes from the greater light gathering capacity of his larger aperture, and a gain of 5 more magnitudes from the exposure time increase factor. This should put his limiting magnitude at around 22 2/3. His faintest galaxy (#2) is 3 1/3 magnitudes brighter than this, which is no doubt due to the fact that his image scale is so much larger than mine that his point sources cover ~4½x the number of pixels: something like 15-17 versus 3-4. 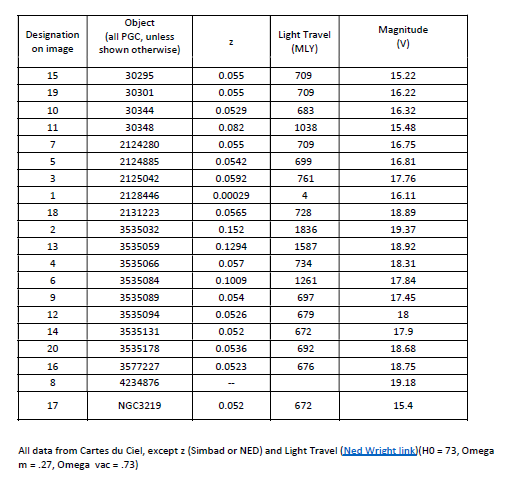 Most of the numbered galaxies are ~12x farther than the Virgo Cluster, or 5½ magnitudes in distance modulus m-M. So the brightest galaxy is NGC 3219 (15.4) rather than about 10th magnitude -- the approximate mean of the half dozen brightest galaxies in my fields (M's 87, 60, 86, 84, 90, and 88). There are also a few galaxies that are evidently background objects several times more distant, based on their (higher) redshifts. 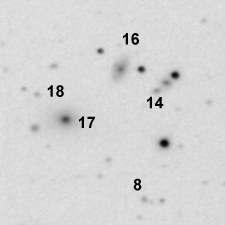 A close-up of part of the field.

More information on the 'scope and exposures:

NGC 3219 must be one of the faintest galaxies in the NGC catalog -- I didn't even know it went down to 15th magnitude. In the fields in which I've worked things start to turn over into IC objects somewhere in the 13's.