Many eminent criminals appear to me to be persons superior in many respects [...] to the average judge.
- H.G. Wells

A citizen had to vote for one Party or the other, and, except for the excitement of faction or the shabby little personal rewards of the spoils system, he got nothing for it -- other than an elected dictatorship.
- H.G. Wells

Tariffs are international acts, a milder form of war. They injure the producer in other countries at the expense of the producer in our own. Theoretically, they are as justifiable as an army or navy -- and their active use is likely to prove as ruinous as warfare to the common man.
- H.G. Wells 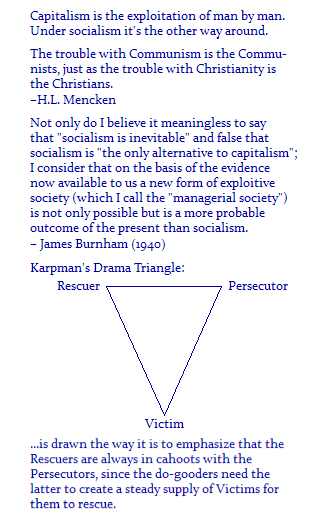 "The majority of nineteenth-century thinkers sought and found other foci of integration than the cosmic and human world order. For Socialists, it was the concept of the 'working class', wrought into a crucified God by intellectuals appalled by the seemingly flagrant social injustice of the earlier stages of the Industrial Revolution. ... For the racist, who must take responsibility for that very nineteenth-century monster, Adolph Hitler, it was the mystical doctrine of 'pure blood'. For the liberal, it was 'freedom', and later "democracy", although old-fashioned liberals tended to love the former and fight the latter tooth and nail."
- W. Warren Wagar, The City of Man

"All the social functions of the capitalist are now conducted by salaried employees. The capitalist no longer has any social activity save the pocketing of revenues, the clipping of coupons, and gambling on the stock exchange, where the different capitalists fleece each other of their capital."
- Engels (1883)

It is useless to dream of going on now for much longer upon the old lines; our civilization, if it is not to enter upon a phase of conflict and decay, must begin to adapt itself to the new conditions, of which the first and foremost is that the wages-earning, labouring class as a distinctive class, consenting to a distinctive treatment and accepting life at a disadvantage, is going to disappear. ... It takes all men to make a world.
- H.G. Wells (1912 / 1921)

A large proportion of our present-day criminals are the brightest and boldest members of families living under impossible conditions, and that in many desirable qualities the average criminal is above the average of the law-abiding poor and probably of the average respectable person in terms, for instance, of intelligence, initiative and originality. ... It may be argued that a quite stupid acquisitiveness and meanness may accumulate wealth, and that a large proportion of business successes are merely the lucky ones among a multitude of gamblers, while many people possessing positive gifts do not prosper: few great scientific discoverers have died rich and the best human brains have quite other preoccupations than getting or getting on.
- H.G. Wells (c.1905 - with regard to Galton's ideas on eugenics)

"Wells believed that the European powers 'had been guilty of an incalculable folly in permitting private men to make a profit out of the dreadful preparations for war.' With armaments being produced on a profit basis, Wells believed it was inevitable that war-intrigues would be set afoot by the newspaper proprietors, politicians and business men with a stake in the armaments industry, as war-scares were the only guarantees of a steady profit."
- John S. Partington

Whatever arms the nations think they need, they must make for themselves and give to their own subjects. Beyond that there must be no making of weapons in the earth.
- H.G. Wells (1914)

This regulation would prevent the arms trade between nations... "in every country [arms production] should become a state monopoly and so completely under government control."

The acquisitive fool with his money bags, the priest with his prayers and incantations, the straining girl in the factory, even the gallant lad in the stokehold of the labouring ship or behind the tommy-gun, can do nothing against our ultimate supreme enemy. Ignorance. Knowledge or extinction. There is no other choice for man.
- H.G. Wells (1944)

The eager and adventurous unemployed young are indeed the shock troops in the destruction of the old social order everywhere. ...They become Communists or they become Fascists, Nazis, the Irish Republican Army, Ku Klux Klan and so forth and so on. ...A wise and powerful government would at any cost anticipate and avert these destructive activities by providing various and interesting new employment and the necessary condition for a satisfyingly successful life for everyone.
- H.G. Wells (1940)

Instead of loyalty to the objective, [the Soviet leaders] demand subservience to themselves.
- H.G. Wells (1941)

Throughout the whole world we see variations of this same subordination of the individual to the organisations of power. Phase by phase these ill-adapted governments are becoming uncontrolled absolutisms; they are killing that free play of the individual mind which is the preservative of human efficiency and happiness. The populations under their sway, after a phase of servile discipline, are plainly doomed to relapse into disorder and violence. Everywhere war and monstrous economic exploitation break out, so that those very same increments of power and opportunity which have brought mankind within sight of an age of limitless plenty, seem likely to be lost again, it may be lost forever, in an ultimate social collapse.
- H.G. Wells (1940)

I am inclined to say that where any class of people have relations of authorities over any other class, then any abuse of the first fair propositions of that relation that can be imagined, will presently be found in being.
- H.G. Wells (1904; to the Fabian Society leadership, Beatrice Webb)

"The economic system produces anarchy because it is of its essence that private enterprise should be left free to develop what activities and development it wishes, on the basis of profit and without regard to the real needs of the community; and the same economic system produces wars because it creates conflicts between powerful groups of private interests, too fierce and deep in the long run for solution by any means less decisive and terrible than war. In short, the present world anarchy is a reflection of the economic and social system, and those who attribute it to anything else are mistaking an effect for a cause."
- Denis Nowell Pritt (Federal Illusion? 1940)

...functionalism taking over all the tasks of the world's governments... he aimed not to destroy them by force but to "supercede them by disregard."
"Authority would derive from the performance of a common task and would be conditioned by it, and not from the possession of a separate 'right'," making war unneccessary as an instrument of policy."
- John S. Partington

"...one key to the problem of national self-determination is to recollect that there are no rights of nations, but only of men and women. If this be true, it cannot be assumed as a matter of course that we have in the past been right in beginning with the nation in order to construct our international order."
- E.H. Carr (1942)

Hardly two months after putting up the above I ran across Claire Tomalin's new (2021) biography The Young H.G. Wells - Changing the World. It's based on the idea proffered by George Orwell -- 37 years younger than Wells, though they died within a few years of each other (1946 and 1950) -- that all of Wells's important work was completed before the time of the First World War. As such he was the prophet of his age for those, like Orwell, who grew up in the early decades of the twentieth century, particularly in England. A Modern Utopia (1905) was specifically mentioned by Orwell. Thus Tomalin's book covers this period of Wells's life, from his first publications in 1893 up to 1911, when he turned forty-five and published The New Machiavelli, The Country of the Blind (and other short stories), and The Door in the Wall (ditto), all in the same year.

For someone like me who knew little of Wells's bio before reading this, this was an interesting and valuable book. I had no idea Wells was such a "libertine" -- the closest modern word we have for things like "open" marriages (or no marriage at all), free(er) love, sexual freedom, etc.. The book spends a lot of time on these various relationships, as well of the host of other writers and famous people (like Churchill) he knew.

However, I would have liked much more on his friendship with fellow novelist George Gissing, 9 years Wells senior. Gissing, like Orwell, died in his mid-forties, and a well known part of Gissing's biography was that Wells was there with him at his death-bed in 1903 (the year Orwell was born). Orwell wrote an essay in tribute to Gissing, and as well there's a pretty decent academic biography of him from the 1970s: The Born Exile, by Gillian Tindall; the title of which is a play on the wording of the title of Gissing's novel Born in Exile. Among other things, Gissing was famous for being the first to write about the "new woman", by now familiar to all, almost de rigueur -- the woman who doesn't seek fulfillment solely in the traditional female roles of wife and mother. Less well known is that Gissing also included the "new man" in his novels, the man who (like Gissing himself) had little interest in the traditional male pursuits of business, banking, law, or the military, and was thus in a state of perpetual alienation from the culture in which he was immersed -- late Victorian England.

©2018-22, Chris Wetherill. All rights reserved. Display of words or photos here does NOT constitute or imply permission to store, copy, republish, or redistribute my work in any manner for any purpose without expressed prior permission.