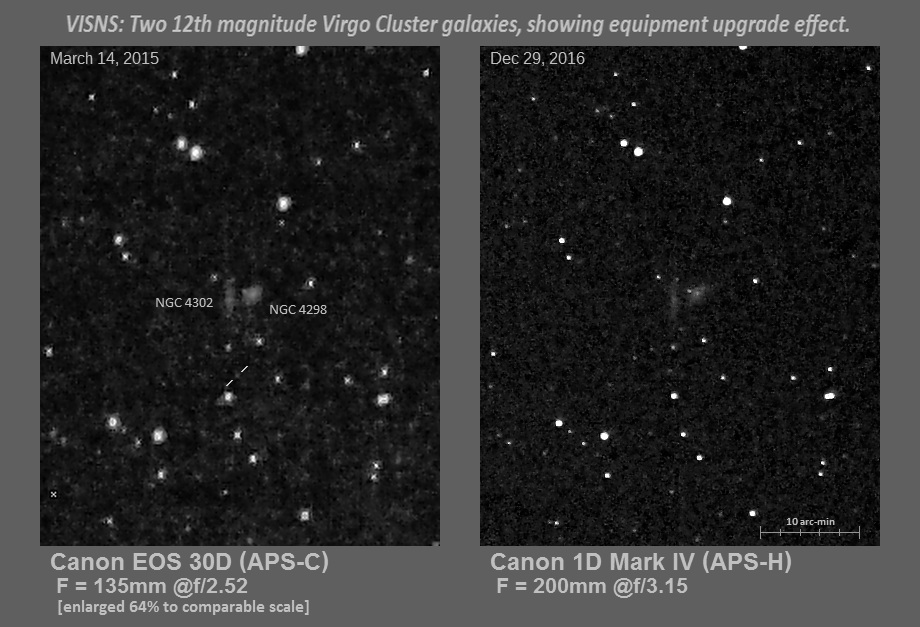 If you look at the faint star below the galaxies which is marked in the first photo and note its location in the second one 21½ months later it becomes immediately obvious that the object has moved significantly, especially relative to the brighter star either just above or below it.

At this scale, this much motion in this short a time would be phenomenal for a star. The rate is ~7½ arc-seconds per year (±10%).

Barnard's Star, the highest known proper motion (and the fourth closest star), is only a little higher, at 10.3 arc-seconds per year.

Barnard's Star is already about as faint (intrinsically) as a star can be, and my object is maybe 3½-4 magnitudes fainter (apparent), so it would have to be further away, 5-6x further, if it was the same kind of star, and more than that if it was intrinsically brighter. It would thus have to have a very high space velocity (relative to the Sun), since Barnard's Star is already up there, at 142½ km/sec. In fact, it's velocity would have to be larger, by a few times at least, than the local escape velocity from the galaxy! This seems unlikely.

So let's say it's a member of the solar system. At the current rate it would take some ~175,000 years to go around the sky once, which translates into a distance from the Sun of ~3100 AU (using Kepler's 3rd Law). This is 75-80x further than Pluto, even though its apparent magnitude is roughly equal to what Pluto was at when it was discovered. The object would thus have to be huge to be so bright. Did I find Planet X?!?

Well, no... As it turns out, these are two different stars. They must both be variable, and I caught them "out-of-phase", such that one was bright (or bright enough) and the other was dim (or dim enough) when I took the first photo, and then the situation was reversed at the time the second photo was taken.

I thought I'd go into this just to point out that no matter what one is looking for -- whether SNe, asteroids, or whatever -- things like this will be found in the fishing net from time to time.