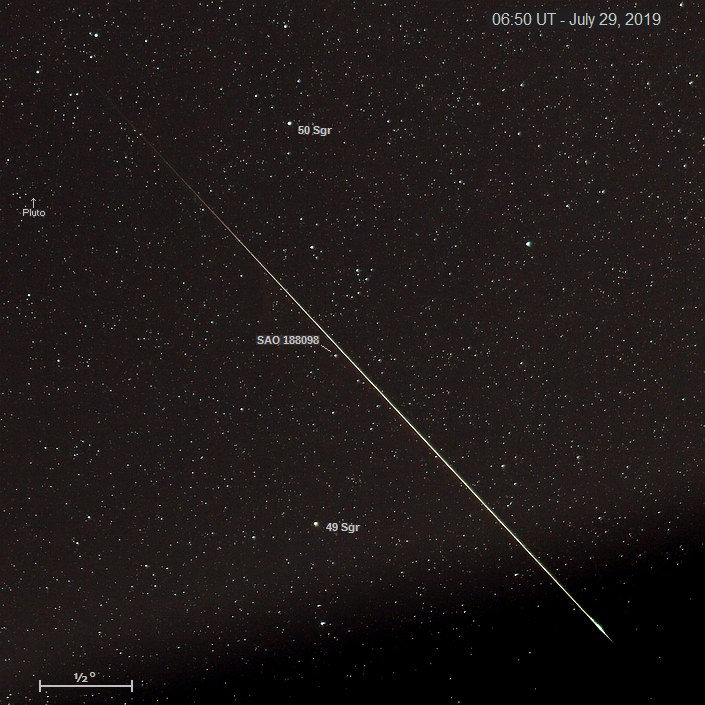 Saturn is just 2° out of the field to the right (W), so anyone in the vicinity who was glancing in that direction, as I happened to be during the time the thirty second exposure was being made, would have seen this meteor, a little bit W of due S and ~28° up.

My impression at the time was that it was just out of the field of view of my exposure by a little bit, so I was surprised to see that I got it. This is pretty much the picture of a lifetime, given that my field of view covers only about 0.2% of the sky above the horizon, so it's a 500:1 shot. Murphy's Law in this instance says the bright meteor you see will always occur in a different location than you have your camera pointing at the time. I've spent numerous nights over the years during the Perseid shower, with a very wide angle lens, trying to catch a bright meteor, and I've never come anywhere close to one like this.

The location of Pluto and a couple of stars in Sagittarius, with their Flamsteed numbers, are shown, as well as one SAO (Smithsonian Astrophysical Observatory) star practically right on the meteor track. This field is just below and to the right (SE) of the asterism known as "The Teaspoon", which in turn is just above and to the right (NE) of the better known Sagittarius asterism "The Teapot". 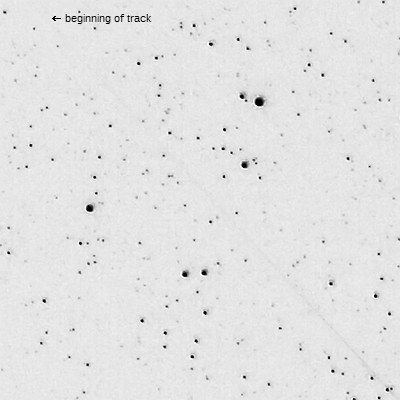 The first, faintest parts of the track start almost in the UL corner of the photo (enlarged at right, in negative form for better visibility), and the full extent is at least 4¾°.

The dark area at bottom and lower right is the roofline of my backyard "observatory" (a camera on a tripod), and it's impossible to say whether the brightening of the meteor seen there is the beginning of a really bright, terminal stretch of the track which was obscured or whether it really ended there. I suspect the latter, based on the stars visible near the bottom of the obscured area: these would have been visible from the top-most edge of the lens at the beginning of the exposure, and since the meteor was brighter than them I think it's trail would have extended farther down into the obscured area if it had gone there.

There are several possibilities for which meteor shower this meteor might be associated with, as three of them that are prominent were active at the time it occurred:

The measured angle of the meteor, using the star SAO 188098, is 43.0°, so the α-Capricornid shower is the best candidate even if it's off in angle by almost 8°. Note that with an equatorial drive these angles are independent of time or location. North is always up.

Wikipedia says the α-Capricornids have "infrequent but relatively bright meteors, with some fireballs". It also says it runs until "around 10 August", rather than 8/25. (Yet a third source says it runs until September 11.) The parent comet is Comet 169P/NEAT, and the shower is only thought to be some 3,500 to 5,000 years old.

Meteor showers often have a notation regarding the speed and/or color of their meteors. For example, for the δ-Aquarids, Norton's Star Atlas (my source) says "Slow. Long paths.". All I can say for this one is that it was pretty fast, but not extremely fast. It certainly wasn't slow. Between this and the angle being all wrong, I think the δ-Aquarids can be ruled out as a possible source for it. The 8¼° discrepancy in angle with the Perseids makes them about as likely a source as the α-Capricornids, though the latter radiant would be much closer on the sky to where the meteor occurred.

A fourth source of information I found on the α-Capricornids says "New Zealand astronomer Ronald A. McIntosh found a second, weaker radiant very near the main radiant in 1935. His observations were reinforced in 1956." It doesn't say where this second radiant is, but maybe that accounts for my angle being off from the official (1st) radiant.

How far away was this meteor? At an elevation angle of about 30°, an assumed and typical height of about 60 miles puts it 120 miles away line-of-sight using simple (i.e., non-spherical) geometry. The horizontal or ground distance would be some 104 miles, meaning it would have been overhead for someone roughly in the vicinity of Electra Lake north of Durango, CO. At this distance, one pixel is 18½ feet; the track is about 1 pixel wider than star images are, but this could be due to the track's brightness. In other words, I don't think the track was resolved.

Several weeks later -- I didn't mark the date, but would guess it was around Aug 24-28 -- I saw a late Perseid with about a 10° (or slightly longer) track. It was almost parallel to the Milky Way, which was well up in the east then, and not far below it (in Alt-Az coordinates) -- roughly from below ζ (Zeta) Cyg to above ε (Epsilon) Peg. When I draw it out on a Norton's Star Atlas star map it measures out at 11 2/3° long. I was looking in the general direction of nearby Delphinus when it happened. It was not quite as bright a track as the 7/29 meteor and it was somewhat but noticeably slower, like a typical bright Perseid.

©2019, Chris Wetherill. All rights reserved. Display here does NOT constitute or imply permission to copy, republish, or redistribute my work in any manner for any purpose without prior written permission.