An Interesting Observation Made During the 2017 Ursid Meteor Shower 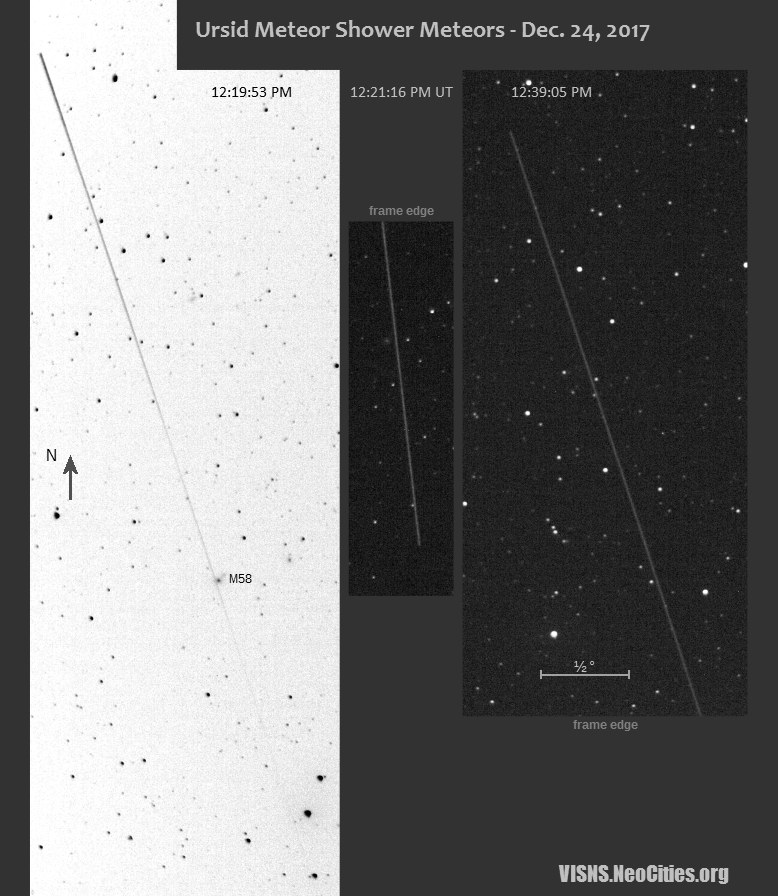 These three meteors were recorded within a twenty minute period the morning of 12/24/2017 (local time), some 45¾ hours after the Ursid meteor shower's expected peak, and only just barely within its usually tabulated date range (12/17-12/24). Universal Time (UT) is shown, and all three photos are reproduced at the same scale. The first two are from exposures of the same field, the third from a field only 3.6° S and 2.0° W of it.

The first meteor is shown as a negative because then the faintest parts of the trail are more easily visible all the way to its eventual fadeout in the lower right corner. It's total extent is 4¾°. The other two tracks are bounded on one end by the edge of the photo's frame -- top and bottom, respectively.

The middle meteor is a late Ursid shower meteor, as the angle of its direction of motion relative to due N is correct (6¾° E or counter-clockwise of vertical), given the locations of the meteor (for M58: Dec = +11°49.1', RA = 12h37.7m) and the shower's radiant on the celestial sphere (Dec = +75°36', RA = 14h20m, which is the mean of six values I found online from previous studies of the shower). (These are both epoch 2000.0 coordinates.) This 6¾° angle is independent of the time of observation, as the two points are fixed relative to one another in an equatorial coordinate system. The angular distance between them is 65°. This radiant for the Ursids is just off the "bright" corner of the Little Dipper, not far WSW from 5 Ursæ Minoris.

The other two meteors were nearly if not exactly parallel to one another, at an angle of 18.0° E of N. There's a ±0.05-0.10° uncertaintly on both this angle and the divergence from perfect parallelism, and it's probably closer to the higher end of the range; this is mainly due to my mount not being perfectly level, which causes "up" in the frames to not be perfectly coincident with North.

Because of the lack of divergence there's no way to calculate a meaningful hypothetical second radiant from just these two meteors, and it wouldn't be advisable to base a putative radiant on only two meteors in the first place. From their 18.0° angle relative to N one can only say it's farther E and/or S of the Ursid radiant, if it exists. The following table shows points along the 18° direction for various right ascensions:

Around 18h the declination maxes out below 72½° and then decreases the farther E you go.

I could be wrong, but I don't think there's any reason in principle why the 18° meteors couldn't be coming up from below -- i.e., from the SW. Especially the track of the brighter one (at left) would look like other meteor tracks I've seen if it had been coming from that direction; the bottom of the track, where it brightens from nothing to maximum, would then be the initial heating of the meteroid. The termination at UL would then be the point where there was nothing left. 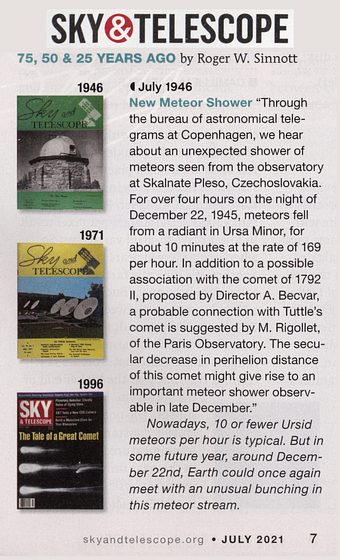 This is not really an area of astronomy I've ever worked in or know much about, so I'm not sure exactly what to make of these two meteors, but thought I'd throw what observations I have out there for others to be aware of and maybe make use of. The original photos are in color, and there's no indication for the two mystery meteors of the greenish color typical of manmade space junk burning up -- if anything the colors are orangeish-red -- but I can't totally discount the possibility.

Ok, because of a bright moon it turns out the skies won't be all that dark. But at least it will be nighttime. One thing to note is that in the western U.S. it will be the evening of the 23rd, not the 24th. The sun's ecliptic longitude at the epoch of observations will be matched with the number above at 23h04m, Mountain Standard Time (06:04 UT, the 24th). Using the epoch 2000.0 longitude number gives a time about an hour (61½ minutes) later -- just after midnight MST on the 24th. Again, I encourage others to make observations in spite of the moon being a bother; the two meteors I recorded were not faint, so if there's anything there it could show up even without a dark sky background.

Well, I got 3+ hours of data, starting 1¼ hours before the first time above, using a wide angle lens which covers ~1/8th of the sky above the horizon -- before the button battery in my interval timer, which trips the camera shutter for a 30 second exposure every 40 seconds, died due to the ~10°F cold. This happened just about the time the moon was setting. I haven't yet gotten to peruse more than 40% of the frames for meteor streaks; so far I've only found one faint one.

©2018-21, Chris Wetherill. All rights reserved. Display of words or photos here does NOT constitute or imply permission to store, copy, republish, or redistribute my work in any manner for any purpose without expressed prior permission.